Dragonholt lies just past the eaves of spririt-haunted Eventide Forest, surrounded by ancient orchards and quiet farms. While much of Terrinoth is perilous, this village is a comparative haven of tranquility – or it used to be. Danger has come to Dragonholt. Bandits and monsters gather in the forest. And a mystical debt comes due…

Legacy of Dragonholt is the first narrative adventure game set in the Runebound universe. This game’s rich story turns one to six players into bold heroes and takes them to the edge of Terrinoth where a mysterious death has occurred. Players have the opportunity to design their heroes and then journey to the far reaches of the realm where they will attend grand balls, battle goblins, and end the reign of an evil count who threatens to usurp the rightful heir of Dragonholt.
The first game to use the Oracle system, Legacy of Dragonholt captures the spirit of a roleplaying game without needing a game master. 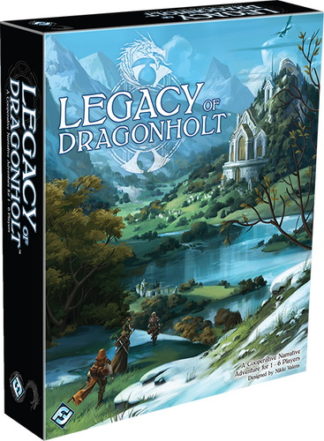