Hacker II, The Dark Side (expansion)

In 1990, Steve Jackson Games was raided by the Secret Service when a “hacker hunt” went out of control. The agents took computers, printers, hard drives, at least one pocket calculator, over 300 floppy disks, and the whole Illuminati BBS.
In 1992, they made a game out of it. Hacker satirized the Secret Service, the hackers, the phone company, and (almost) the whole Net. The game puts you in the role of an elite computer criminal, competing with fellow hackers to invade and control the most systems on the Net.

Hacker uses a variation of the Illuminati system, players lay out cards (representing systems) to create the Net, which is never the same twice. But instead of separate “power structures” for each player, there is only one Net, and players place tokens to indicate what systems they have invaded and how completely they control them.

Hacker II – The Dark Sideis a supplement to Hacker. It adds new and evil rules – Viruses, the Internet Worm, outdials, multiple accounts, Black Ice, and Military Hardware (hot new gadgets you’re NOT supposed to have). Plus consoles and tokens for 2 more players!

Even though it’s just a supplement, Hacker II won the Origins Award for Best Modern Boardgame of 1993.

Again, Hacker II is not a stand-alone product. You need the original

Only one copy left, factory sealed! 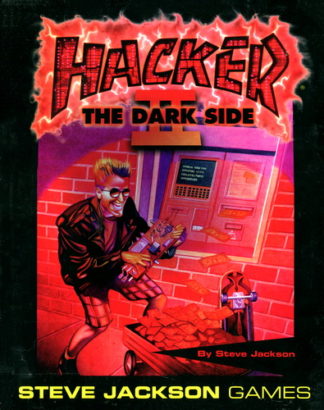