Spaceship Construction and Transport Business in a Far Future

Corporation Incorporated, the galactic leader in sewer system construction, is looking for can-do guys and gals to haul materials to remote regions of the galaxy. Must be willing to fend off meteors, smugglers, and pirates.
Experience working with aliens a plus.
Earn copious cosmic credits with bonuses for speedy delivery.

A game of Galaxy Trucker consists of three rounds. In each round, the players begin by rummaging through the Warehouse, trying to grab the best components and build the best space ship. Once the ships are under way, the players try to avoid snares and obstacles, while grasping financial opportunities, each hoping to be the first to finish with an undamaged ship.

It’s possible that you will end up with an insurmountable debt and finish your days panhandling on the streets of Deneb III, but if Lady Luck should smile upon you, you just might find yourself among the 10 billion richest people in the Galaxy! 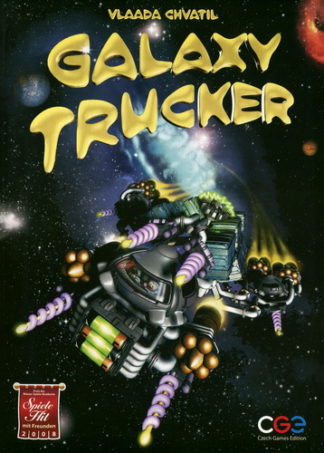