Terrinoth is a land filled with great wonders that date to the far past of the First Darkness, but it is also filled with terrible dangers. Ghastly undead creatures, ravenous monsters, ferocious dragons, and horrific demons lurk here as well. Adventurers must always be prepared when exploring forgotten treasure vaults and castle ruins, for it is a certainty that they won’t be alone in such places!

This Foes of Terrinoth Adversary Deck includes cards for 20 adversaries from all across the varied lands of Terrinoth and beyond.

The Foes of Terrinoth Adversary Deck is not a stand-alone product. The Genesys System Core Rulebook and the Realms of Terrinoth supplement is required to play. 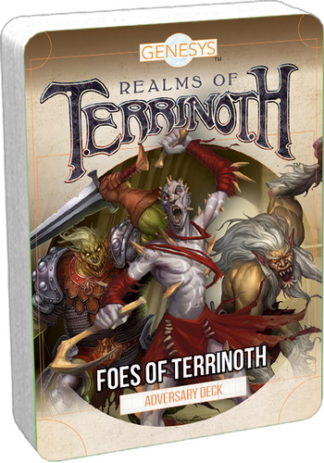