Mog’dor the Fire Dragon strikes again! From his nest in the eastern mountains he came, incinerating the countryside and all the people who would dare stand between him and his goal: the city of Arcadia. Unless the squabbling Guilds can put aside their differences for a moment and band together agianst this fiery threat, Arcadia will burn to the ground.

This Fire Dragon set for Arcadia Quest can be used as a big finale for any campaign. The Heroes have taken on the baddie only to return home and find out that a bigger one is threatening the city. The expansion includes a new double-sided game tile to play the battle out on, as well as the massive Fire Dragon figure. It also includes new Level 6 Equipment cards to outfit your Heroes for the big fight, plus everything else you need to play out this climactic battle.


Requires an Arcadia Quest or Inferno core box to play. 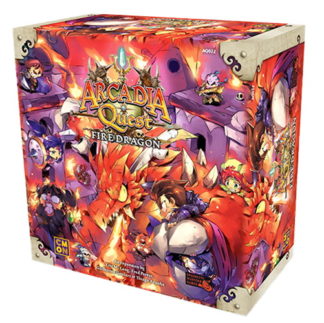