Gather your Faction and Escape the Fury of Mount Vargah

Over the hammering noise of your steam powered airship, you hear a distinct and frightening roar. Your opponent has summoned a fearsome Stygian dragon! The scaled beast glares furiously at your army marching below, diving in for a brutal and bloody kill.
In response, you rekindle the Chaos spark smoldering in one of your berserkers by channeling the power of your energy crystals. She lunges towards the majestic beast, a clash of fury and fire that brings further ruin to an already shattered world.
Have you bought your faction enough time to reach sanctuary or will you suffer defeat at the hands of your pursuer?

In Existenz: On the Ruins of Chaos you lead one of four scheming factions on a great escape from the harvesting grounds near recently awoken Mount Vargah. During the Great Flight old feuds are being settled between you and your opponents. The Arnunnian Alliance has mastered magic and strikes with lightning speed, the Red Barbarian Brotherhood pursues with brutal and unrelenting force, the Pirate Confederacy cunningly sneaks past their opponents, while the Undead Legion’s growing numbers threaten to overwhelm all that stand in their way.

ON THE RUINS OF CHAOS
X610Z©: Existenz is a strategy card game in which epic battles are fought on a game board. The game is played by two or more people, each controlling a life base: your faction’s floating bastion of power. Fighting off your opponents, you try to escape from the center of the board towards the safety of the outer rim.
You use energy crystals to fuel arcane technomantic rituals in order to protect your life base, or to obliterate your enemies. These rituals allow you to control creatures of tremendous power and create constructs of awe-inspiring size.
The magical arsenal of cards in your deck allow you to manipulate the course of the game and deliver deadly combos.

The 4 different card decks
Each deck represents a different faction in the world of X610Z and has its own unique corresponding playing style:
Arnunnian Alliance: masters of magic striking with lightning speed.
Undead Legion: zombie overlords threatening to overwhelm all.
Pirate Confederacy: cunning thieves looking for opportunity.
Red Barbarian Brotherhood: brutal and unrelenting force.
New decks in the future. 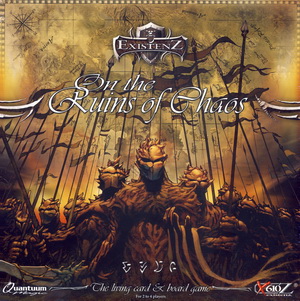