The mystery of life isn’t a problem to solve, but a reality to experience.
– Reverend Mother Gaius Helen Mohiam

Arrakis, the planet of spice and endless sand at the far end of the Imperium, is filled with intrigue, conflict, and war. On the infamous planet of Dune, you find yourself between two Great Houses. The sinister House Harkonnen schemes for power and profit, while those loyal to House Atreides rally a rebellion among the native inhabitants long suppressed under Harkonnen rule.

Featuring the co-operative game system used in Portal’s award-winning Detective: A Modern Crime Board Game, Dune: House Secrets delivers a deeply thematic experience that drops one-to-five players in the middle of the highest stakes unfolding on the harsh desert planet of Arrakis.

In this story-driven adventure game, players take on the roles of rebels who must solve a series of challenging missions with a finite amount of time and resources. Players cooperatively make decisions on how to progress the story as they decide to explore different regions of the world, follow leads, leverage allies, and overcome opposition of all kinds. During gameplay, players use a variety of physical and digital game components — a deck of cards with essential clues and plot twists, a dozen physical handouts, and a dedicated website with additional resources — to steer the narrative in fun and surprising directions for a truly immersive experience.

Beginning with an introductory prologue designed to get players acquainted with the massive Dune universe, the game then continues with three big adventures, each taking roughly two-to-three hours to play. During each episode, players can earn experience points to level up their characters in between missions and unlock new options in future gameplay. Each adventure can be played separately as standalone episodes, yet should players complete all three episodes, they will unravel a master game narrative with an epic climax and unforgettable resolution with lasting impact on the future two games in the trilogy. 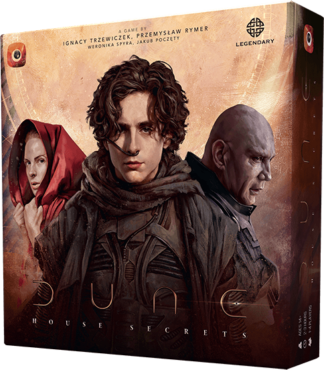