Dune – A Game of Conquest and Dipolomacy

Dune, A Game of Conquest and Diplomacy builds on 40 years of development, refinement and evolution from the original classic game.

This is NOT a reskin of the classic Dune game, re-published in 2019. It has the same beloved DNA, flavour, tension and themes, BUT with beautiful new game board design, updated look and feel to reflect the upcoming film, more spice, new streamlined rules, and a new market deck where you can purchase game advantages.

The brand new 2-player mode really opens up new gaming opportunities, all making the game more accessible for even the most casual gaming nights where not quite such a time / player number commitment is required. For this reason, Dune, A Game of Conquest and Diplomacy doesn’t replace the original classic Dune, but sits next to it in the cabinet / on the shelf.

In Dune, A Game of Conquest and Diplomacy you will take control of one of the four great factions–House Atreides, House Harkonnen, the Fremen, and the Imperium, all vying to control the most valuable resource in the universe: melange, the mysterious spice only found at great cost on the planet Dune.

Ship your forces to Dune, harvest spice, seize control of strongholds, and destroy your enemies.

Who will control DUNE… You decide! 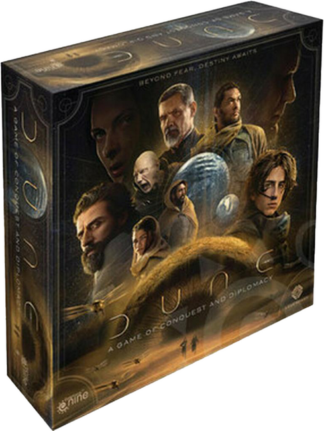 Je bekijkt nu: Dune – A Game of Conquest and Dipolomacy €53,50
In winkelmand