The White Lions Stalk Their Prey

As formidable as the Direwolves of House Stark, the Hrakkars, white lions from across the sea, are dangerous when out in their natural habitat. It takes great skill to kill one, but the true test of a khal is to actually subdue, capture, and tame one of these majestic beasts. If this mighty task is accomplished, the Dothraki gain a new weapon in war that is nearly unmatched in combat.

The Dothraki Hrakkars unit box for the A Song of Ice and Fire: Tabletop Miniatures Game gives House Targaryen players a fierce animal warrior and its handler for their armies. The lion and its handler work as one, using fangs, claws, and blades to slash their enemies to pieces. Even enemies clad in heavy armor have much to fear from these foes. They are also master ambush hunters, able to suddenly strike from where the enemy least expects it. 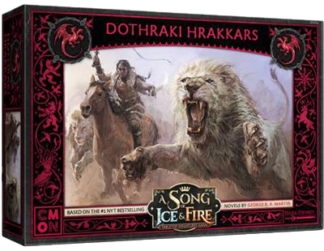