When you’re the son of the most respected bronze dragon in Faerûn, you need to prove yourself more than most dragons! Eyruaad the bronze dragon may be young, but he’s full of determination, courage, and more than his fair share of adventurous spirit. He’s even taught himself how to hover in mid-air, an impressive feat for a dragon, and a talent he often uses to surpise his enemies before unleashing a burst of lightning breath!

When the older dragons are unable to breach the adamantine doors blocking the way to the hall of Luminos the Mighty, a secret passage becomes the only way inside. The larger dragons, unable to polymorph down to human size due to an enchantment outside the palace, must wait outside while their minions forge ahead. Fortunately, Eyruaad is just small enough to cram himself through the tight passage, and now he is eager to prove himself to his brethren. But what he finds inside the hall of Luminos would dismay even the most experience of dragons…
Contents: 9 Cards, 24 Tokens, 2 Maneuver Dials, 1 Painted Plastic Creature with Base and Pegs

The D&D Attack Wing Young Bronze Dragon Expansion Pack has everything a player needs to begin a new chapter in their epic journey of war and conquest. 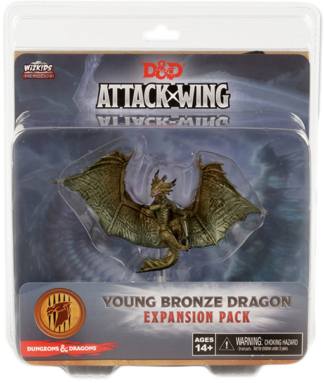