Sycorax is revered as a queen among her wretched kind. Equipped with a deadly bow, a monstrous aim, and an insidiously captivating song, she is a foe whose reputation for cruelty is known throughout the Moonshae Isles.
Although Sycorax once ruled the windswept Temptest Island where the Chainspire is anchored, she was banished many years ago and is unable to return due to the damaging winds that keep all intruders away. However, the harpy queen has now allied herself with the dragon cultists, and she assures them that if they can deliver her three elven prisoners, she will be able to perform a sacrificial ritual that will open a portal to the eye of the storm, and the way to the Palace of Luminos the Mighty will be open once more!

The D&D Attack Wing Harpy Expansion Pack has everything a player needs to begin a new chapter in their epic journey of war and conquest. 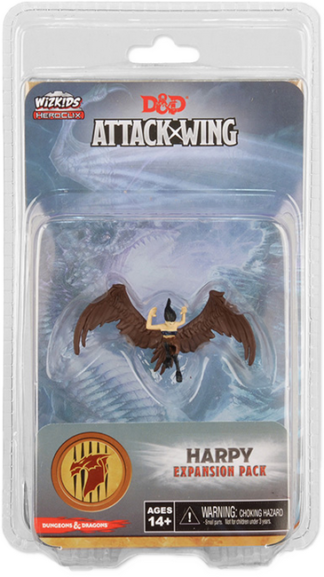