Jarl Hörn is considered the most sinister Frost Giant alive by his clansmen, and that’s saying something! His Frost Greataxe and Blackguard’s Mail make him a formidable opponent as well. Few challenge his authority, and those who do soon regret their mistake.
Hörn likes to hunt alone and then return home to regale his kinsmen with tales of his adventures. But today the Frost Giant may have (literally!) bitten off more than he can chew. When he uses the Horn of Blasting to cause an avalanche in the hopes of luring prey to the disaster site, he has no idea just how many creatures will arrive. Either death or glory will await him, but he will not hesitate to engage his many foes, no matter the risk…

The D&D Attack Wing Wave 1 Frost Giant Expansion Pack has everything a player needs to begin a new chapter in their epic journey of war and conquest. 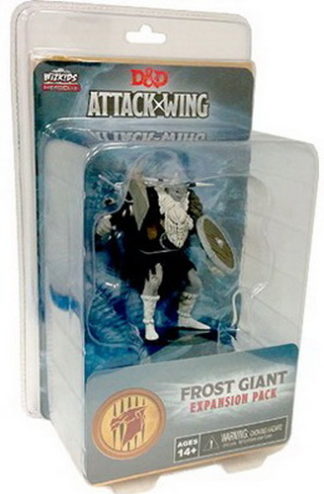