Court of the Dead`: Mourners Call

Do you have what it takes to Rise, Conquer & Rule?

All of existence is mired in an endless battle between the equally corrupt realms of Heaven and Hell. The dead are enslaved to collect the mortal souls that fuel their war. You are a mourner – an allegiant of Death – dedicated to realizing his noble ambition to rise up and end the clestial war.

But the Underworld is divided into three factions – Bone, Flesh and Spririt. You will need to strategically manipulate your influence within these factions, their strongholds and guilds, and within the Court of the Dead, to unite the Underworld to be ready for war. Wield your power wisely. You must appease the celestials. Amass power in secret without drawing their suspicion. And avoid falling prey to your own destructive power, a dark pull known as the dreadsgrip.

You and your fellow mourners rise or fall together. But only one mourner will achieve his or her particular vision of the united Underworld for which all mourners call. 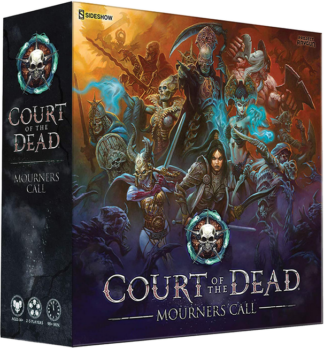