Enter the realm of Hyboria and fight alongside Conan!

Considerably larger than the heroes from the Core Set, Yogah of Yag enters the game with a whopping twelve energy, a melee attack that rivals even Conan’s, and the ability to cast spells. Additionally, this strange hero’s abilities recall his appearance in The Tower of the Elephant by allowing him to sacrifice himself for another hero and then strike at his foes from beyond the grave.

Not a complete game! Requires a Conan core box to play. 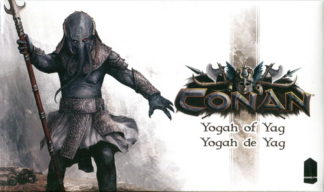