Conan Vol.03 – The Tower of the Elephant & other stories

The Tower of the Elephant & other stories

Volume 3 – The Tower of the Elephant & other stories

Conan leaves youth behind as a quest to rob a lengendarily impenetrable tower brings him face-to-face with one of the most harrowing secrets in the universe.

Eisner Award-winning writer Kurt Busiek, Eisner Award-nominated artist Cary Nord, and Eisner Award-winning color artist Dave Stewart continue their groundbreaking run on Dark Horse’s best-selling Conan series with a tale that takes Conan from the demon-haunted tomb of an ancient sorcerer to the darkest alleys in the City of Thieves and finally to the jewel-encrusted heights of the fabled Tower of the Elephant!

Considered one of the greatest yarns ever spun by Conan creator Robert E. Howard, ‘The Tower of the Elephant’ exposes Conan to horror on a cosmic scale, revealing to the barbarian worlds beyond the reach of human knowledge, and the even more unknowable darkness that lies within those willing to do anything in pursuit of power.

The critically acclaimed team of Busiek, Nord, and Stewart – with a special appearance by celebrated illustrator Michael Wm. Kaluta – delivers another superlative adaption of a Howard-original story, while expanding upon that vision in an adventure unlike any Conan has ever undertaken – one involving new comrades, sudden death, horrifying creatures, and gruesome unsettling fates for both gods and men. 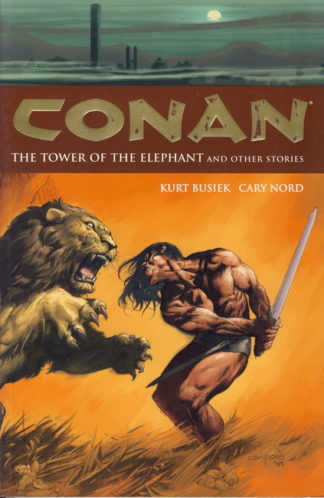