Brave the dangers of the Dark Souls world with six new characters for Dark Souls™: The Board Game. Take control of the agile thief, faithful cleric, bloody mercenary, fiery pyromancer, arcane sorcerer, or determined deprived. Seek out the most coveted suits of armour and ready yourselves for the dangers that lie ahead.

These six new characters come with their own miniatures, character boards, and treasure cards, giving players more than double the character choices for their adventures through the world of Dark Souls. Many of these characters provide new starting points for the adventure, such as the mercenary’s two-weapon fighting style or the sorcerer’s long-range magical attacks. The deprived even introduces a new style of progression, beginning the adventure very weak but with the potential to ultimately use any treasure in the game.

The Characters Expansion also includes 10 of the most iconic armour sets from Dark Souls™. Each armour set is represented by its own miniature as well as two treasure cards, allowing players to choose between finding these armour sets early in their adventure or questing further to discover even more powerful versions of their favourite Dark Souls™ armour.

Not a complete game. The Characters Expansion is intended for use with Dark Souls™: The Board Game. 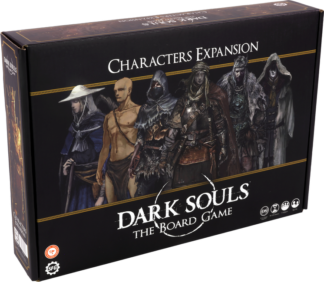