Nature Red in Tooth and Claw!


Meziah twitched his mousey snout and took aim with his ballpoint pen sniper rifle. He held his breath and – crack! The rat went down, and that seemed enough encouragement to cause the other Junkers to route. But there was little time to celebrate as a gecko hunter emerged from the nearby underbrush and made a beeline for Meziah. The Scaled Ones were joining the fray!

Battlelands is set in the world of the Adventure Book Game – Aftermath, a creation of Mice and Mystics designer Jerry Hawthorne.
The humans have all disappeared and now the animals must do whatever they can in order to survive. Collect your faction and battle for scrap in this 3-5 player turf war.

You may have won the battle, but can you win the war? The player with the most scrap at the end of the second war wins the game. 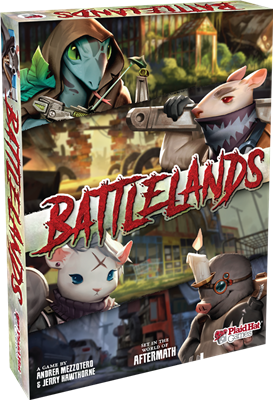