There are things in the endless passages beneath the world: things that feast on the dead. Spewing foulness in their wake, they carry death with them, dragging their vast bulk through an endless darkness. Corpse Crawlers. Enormous worms, oozing through the veins of the earth, drawn by the scent of those buried beneath the ground. In times when the world is wracked with war, or when plague and famine stalk the land, the Corpse Crawlers multiply, growing to enormous sizes, making the earth itself tremble as they slither beneath the surface, always hunting more food, more death…

Can you overcome this gluttonous abomination, or will you end up as worm food?
Inside this box, you’ll find everything you need to run a truly epic boss encounter with a monstrous Corpse Crawler. 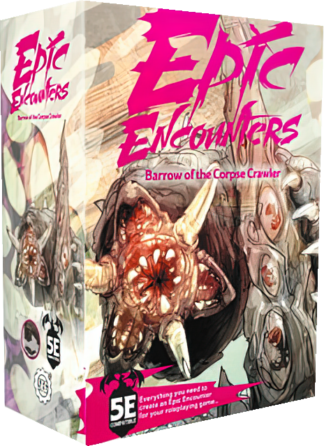