United We Stan For Stannis.

When Robert Baratheon died, control of the Iron Throne went to his son Joffrey. However, Robertâ€™s brothers are also seeking to claim the throne for themselves. Both Stannis and Renly want it, each one with a cadre of followers who support their claim to the Iron Throne and are willing to do what they can to seat their choice seated there.

The Baratheon Heroes 1 box set for miniaturesgame A Song of Ice & Fire gives House Baratheon players a host of options for when they field an army loyal to King Stannis.
The box set contains seven new characters, including a new version of King Stannis himself. With four new options for army’s Commander, players will be able to customize their forces to their liking. All the Stat and Tactics cards needed to play these devoted followers are included, so they can be used right out of the box.
Miniatures are supplied unpainted. Preparation and assembly may be required. 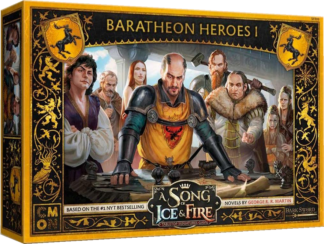