Lead your Guild and loot the Undead infested city of Arcadia!

Dr. Spider’s vile experiments in his search for immortality have unleashed the undead on the streets of Arcadia! Ghosts, zombies, and skeletons terrorize the city under the command of an ancient legend, now freed from his tomb: the Dread King!
It’s time for your Heroes to put these Monsters back where they belong: six feet underground!

In this campaign expansion for Arcadia Quest, players pit their Guilds against the Dread King’s undead horde and Dr. Spider’s freaky sidekicks. This expansion introduces several new mechanics to the game, including equipment that gives Heroes more power the more times they’re killed, magic spells that can banish their target to the netherworld, ghosts that can move and attack through walls, and Tombstones that help bring an element of surprise to the game. 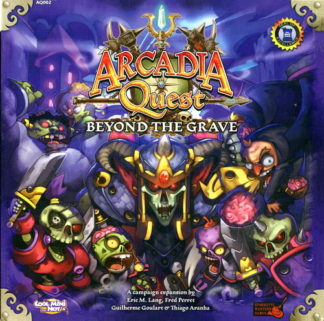