Allies of the Old West (Shadows of Brimstone Allies expansion)

When Dark Stone was first discovered in the area around Brimstone, outsiders flooded in, looking to get rich! Now, they come looking to make a name for themselves (and maybe get rich along the way too). Though many of those that arrive are true Heroes in their own right, most are common folk with dollars in their eyes, blinding them to the horrors that await. Hiring themselves out as Henchmen, they join up with posses heading down into the dark mines. The flood of fortune seekers and merchants have also brought with them supplies and Pack Mules to carry the load, Blacksmiths to support the effort and forge the ‘Black Rock’, and Faithful Dog companions to help in hunting through the dark places of the world.

This Allies Expansion contains everything you need to add Old West Allies to your games of Shadows of Brimstone!
Included Ally Record Sheets for using Basic and Advanced versions of each Ally Type, the Upgrade and Mutation Charts for each Ally Type, a detailed Henchmen Exploration Chart (including the Gruesome Fates). and a host of new cards themed around hiring on these Old West Allies to help your Heroes out on your adventures down in the mines and beyond! 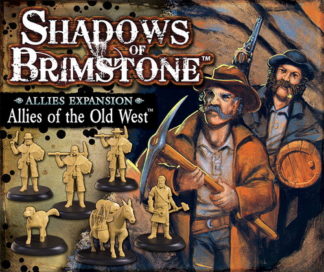