A desperate bid for survival in a shattered world.


‘They were the best of us,’ Meziah said, scratching a mousey ear, and the others nodded in agreement. The providers had kept the colony safe and supplied for as long as it had existed. But now they were gone, and the burden of the seemingly impossible heroics they had accomplished daily, now fell on inexperienced shoulders. ‘They’re out there, somewhere,’ Meziah whispered, and in the distance they heard the howl of a predator. Hunting birds circled overhead the ruins of the city, and far off in the distance, a car alarm sounded before dying awkwardly. ‘Let’s go bring them home.’ And they strapped down their supplies, hoisted their weapons, and pushed forward into an uncertain dawn.

Aftermath is the latest addition to the Adventure Book Game line. In a world where all humans have mysteriously vanished, players will take on the role of a heroic rodent working to protect and provide for their colony.
Venture out into the ruins of mankind on 27 story driven missions. Collect useful scrap and food for your colony but beware of the predators lurking in the shadows. Use makeshift weapons to defend yourself and your allies. 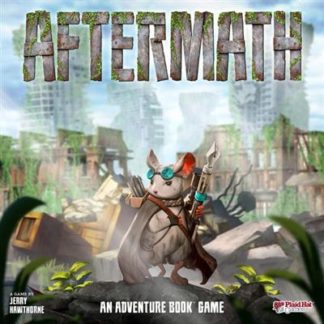